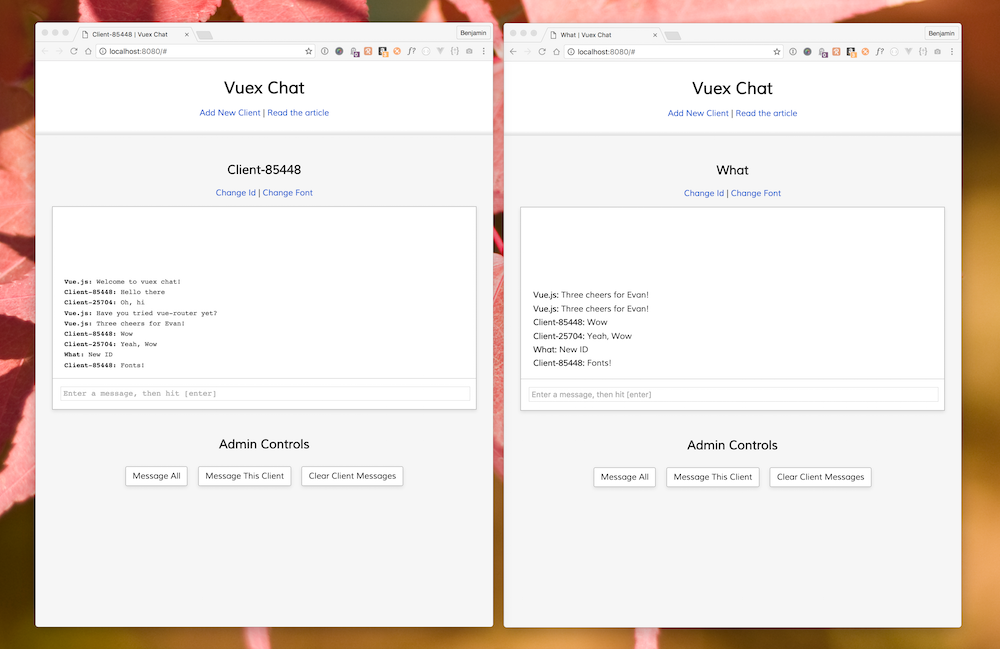 In my last post, we took a look at how you might implement shared state in your Vue.js app by comparing a vuex implementation with a hand-coded alternative. Incorporating vuex, as we saw, is pretty straightforward once the core concept of one-way data flow in Vue makes sense.

This time, I’d like to take the demo a little further by introducing modules, constants for mutation names, and organizing our actions a bit differently.

Along the way, we’ll also work with a couple of mixins that provide shared functionality to our components, and we will leverage this localStorage API to simulate passing messages between clients.

Before we dive into the code, go try the demo. One big difference in this demo is that you can spawn two (or three, or ten, or 100) windows / tabs and chat between them. This is accomplished via the local-storage package mentioned above, and we’l cover that later on. In the meantime, try out the chat client, the admin buttons, and see what happens when you add new clients.

(Note: If your browser doesn’t support localStorage or JSON, the demo probably won’t work. Apologies as I haven’t had time to shim it for earlier browsers; it’s on the todo list.)

This time around, I’ve thoroughly commented the code, so feel free to go grab the repo, sift through the code, and fire it up on your local machine.

In order to begin to organize our code a little better, we’ll start chunking bits of the vuex store into modules. This also has the advantage of scoping mutations to the module’s state, not the rootstate (though you can still get at rootstate if you need). Adding a module to store.js is a piece of cake.

With that out of the way, here’s the module code:

I’ve stripped the comments out here, but let’s take a quick look at what’s going on.

For more info on namespacing, designing vuex modules, and the scope of all the moving parts of your store, consult Section #6 of the vuex docs.

Before we dive into the big changes in Client.vue, let’s take a look at our mixins. Mixins provide additional functionality to components by blending in methods and lifecycle hook callbacks. We could also create a base component that we extend, but mixins allow us to decorate different types of components that may not share a common ancestor.

Here’s the simpler of the two, message-mixin.js.

All this mixin provides is a method that takes our message text and the sender’s id, then packages it up in a structure we save in our store. It is a simple convenience function, and keeps us from worrying about how a message is composed internally. (Note also we are making use of ES6 default values.)

When we use any of these mixins, we can call them as if they were methods we had defined directly on our component, so this.ls_pushMessage(someMessage).

We’ve moved almost all of the app’s functionality into Client.vue this time around, removing the code that was in App.vue last time so the code is more clearly related to the DOM it acts upon. That also makes it self contained so we can truly plop it into any context without worrying about how to set it up.

The template is largely unchanged, but there are a couple of points of interest. Here’s the important bit:

Now for the code:

I won’t dive too much into the code here, as the comments in the file should give a complete picture of what is happening in the file. Here’s the highlights:

Whew. There’s a lot going on there, but it all flows pretty nicely from where we’ve been so far.

The Admin component is trying to simulate a server-side administrator doing some things. Obviosuly this wouldn’t be exposed alongside the CLient component in real life, but that is a good demonstration of a key concept in Vue: carefully planned, we can reuse so much of our app’s code in different contexts and configurations.

In this case, because we moved some common functionality to mixins, and we defined our actions and mutations carefully, we could envision building an admin client quite easily. In fact, next time we’ll lift make it so we can inject the admin functionality into an instance of the client so you could run the same app, but with different permissions to allow different functionality.

Conclusion and Next Steps

Not bad, eh? We are sending messages around between windows, getting updates, and more. This time around I wanted to demonstrate messaging between clients as we started to modularize, but not require much in the way of additional npm packages or running additional servers.

Next time though, we’ll integrate Feathers.js so we can run a backend server, and get messaging for real. As mentioned, we’ll also create a true admin interface, so we can boot rowdy guests, send admin messages and maybe even start “rooms” on our chat server (stretch goal there).

I’m also working on a few other things:

As promised, a bit more about the localStorage wrapper I chose. local-storage seemed to offer everything we needed for this demo. It serializes data for us, using JSON.stringify / JSON.parse, so we don’t have to worry about preserving objects or values other than strings. It also provides the watch functionality we needed to trigger updates.

I’m aware of other packages like store, but unless I missed something in the docs, it does not provide a watcher out-of-the-box.

In the end, I needed something quick and dirty to simulate a message server, and local-storage fit the bill. If you have thoughts, or suggestions for a better API wrapper, drop a line or a PR.

I wrote a book about Vue.js along with amazing developer and author Erik Hanchett.

I am a designer, developer, and proud father, living in the greater Seattle area. I have spent the last two decades building apps, websites and software with some terrific folks, and now I am striking out on my own.